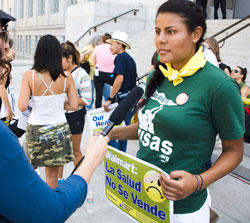 Cynthia Chavez is just one of the many supporters who joined the warehouse workers in their 50-mile, 6-day pilgrimage from Ontario, California to Downtown Los Angeles.

Cynthia, currently a student at the University of California, Riverside, is actively involved in student organizations on campus such as el Movimiento Estudiantil Chicano de Aztlan (MEChA) and United Students Against Sweatshops (USAS).

When ask about why she thought it was important to participate in the march, she responded:

“As students we need to support the workers. It’s not fair; warehouse workers are not being respected. They don’t even have access to basic human needs, like water. As students, whenever people who are oppressed stand up for themselves, we need to stand in solidarity with them. It is important for students and other people to get involved.”

She first learned about the working conditions of the warehouse workers and the pilgrimage at a USAS meeting. As a student at UC Riverside, a university in the Inland Empire located not too far away from the many warehouses where the warehouse workers are employed, she felt a sense of obligation to help bring justice to the workers.

“At the meeting, we were pumped up. We contacted some students. And we marched the whole 50 miles. I can’t even express my feelings. At first, when I talked to workers they were telling me about the working conditions. They are being exploited. When they touch containers, it’s really hot, and they can burn themselves. They also have many accidents at work because they are working with broken equipment.”

“East Los Angeles is my community. As we were walking through East Los Angeles, I was starting to tear up. It was then, that I knew I was at the right place, at the right time. I also felt sad because I was the only student marching, but now I know it is my job to bring this back to campus.”

Last summer, Cynthia had an internship in Nicaragua where she worked with employees at an Adidas factory.

“In Nicaragua, I learned how women have miscarriages at the workplace. How workers get death threats for organizing. And then I come here, back to the US, and I hear about warehouse workers being exploited. Workers are being exploited everywhere by corporations like Walmart. How can this be happening in the US? I am here today, supporting the warehouse workers and I will be here until the end of the fight.”

Cynthia is studying political science, international relations, and labor studies. After graduation from college, she hopes to continue helping organize workers alongside the labor movement. 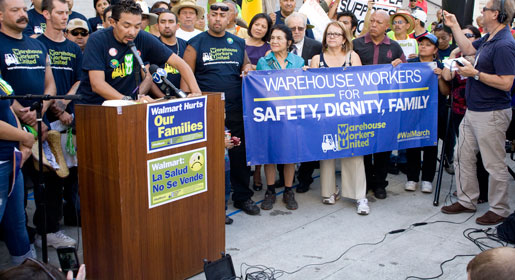 Hundreds of warehouse workers and their supporters marched their final steps through Downtown LA after walking 50 miles from the Inland Empire for safe jobs.

Around the nation, striking warehouse workers, Walmart store workers and community members called on Walmart to take responsibility for the poor working conditions in the warehouses that move their goods. Delegations attempted to meet with a number of Walmart representatives, senior executives and board members. The groups also delivered the now nearly 40,000 signatures calling on Walmart to sit down with warehouse workers to discuss their working conditions.

“Walmart claims it holds its contractors and suppliers to the highest standards and expects them to comply with the law, but when we speak out about it, we get retaliated against and Walmart ignores us,” said David Garcia, a striking warehouse worker and father of two, who although has worked for six years at the same warehouse is still only considered a “temporary” worker because of how the industry outsources and operates with temp agencies.

In Silicon Valley, warehouse workers and Walmart retail associates went to Walmart board member Greg Penner’s house. The workers had been ignored after previous requests to meet. “When we spoke out to change terrible working conditions, workers were suspended, demoted and even fired. They spied on us and bullied us, all because we are fighting for dignity,” said Limber Herrera, a warehouse worker for four years in Mira Loma, Calif.

Voices From the March

“Today I witnessed a Walmart Associate find her voice. She was not someone who has ever done any public speaking but was [inspired by the Warehouse workers]…the empowerment when people find their voice is encouraging and inspiring.”
– Simone Mock (UFCW Local 5 Member)

“We’re stronger when all sectors of Walmart [workers] come together. Now all we need are some executives on our side.”
– Dominic Ware (Walmart Member)

“It’s awesome that we’re united even though we’re from different areas. Actions like these make us one.”
– David Garcia (Warehouse Worker)

Hundreds of warehouse workers and their supporters marched their final steps through downtown LA after walking 50 miles from the Inland Empire for safe jobs.

The “WalMarch,” a 50-mile, 6-day pilgrimage of warehouse workers, is drawing national attention on deplorable working conditions inside Southern California warehouses that serve major retailers including Walmart. Workers are asking for basic yet critical improvements on the job: fans to combat the 100 degree heat, functioning equipment, clean water, regular breaks, and an end to inhumane work quotas and retaliation for speaking up about safety conditions.

Voices From the March

“I believe all workers deserve fair wages and good working conditions. It is so important to bring good jobs into our community. This march is bringing that awareness to our community.”
– Valeria Lizarraga (Coalition for Economic Surv)

“These are workers that, like many people in our society, don’t have the rights that many of us in older unionized industries have. That’s why I’m out here to support them.”
– Lenny Potash (AFSCME Member)

“Occupy LA has been supporting the warehouse workers all year. Walmart represents the globalized economy of the 1 percent. We want to rebuild the economy so everyone can have good jobs, including the warehouse workers. Walmart represents a race to the bottom. Occupy is about justice and we think together people can achieve that.”
– Michael Novick (Occupy LA)

“The warehouse workers’ action is an inspiration to workers around the world. They’re standing up to the biggest private employer in the world.”
– Joann Lo (Food Chain Workers Alliance)