Warehouse Workers United was originally founded in 2009 to bring together warehouse workers in Southern California and worked closely with community groups in San Bernardino and Riverside counties in Southern California including the Pomona Economic Opportunity Center and CCAEJ as well as national coalitions and groups like the UCLA Labor Occupational Safety and Health Program, Council on Occupational Health and Safety, the Food Chain Workers Alliance and the Staffing Workers Alliance.

In part because of the courage of warehouse workers, the public discourse about low-wage work, temporary jobs, wage theft and unsafe working conditions has led to higher minimum wages in California and in cities like Los Angeles and to greater enforcement and protections for subcontracted workers.

In 2011 warehouse workers participated in a comprehensive health and safety certification course and then surveyed their peers on occupational hazards in the warehousing industry. The report, Shattered Dreams and Broken Bodies, written by the UCLA Labor Occupational Safety and Health Program is the result of the survey. It shows that the majority of workers have experienced and witnessed workplace injuries and illnesses in warehouses, and that they are systematically discouraged from reporting hazards or injuries.

A group of warehouse workers, who risked their jobs and livelihoods, helped shed light on working conditions inside America’s vast and growing network of windowless warehouses essential to the logistics sector. In September 2012, subcontracted warehouse workers at a facility used exclusively by Walmart contractors called the NFI Crossdock in Riverside County, went on strike to protest low wages and unsafe conditions. They sparked a wave of worker action across the country. The warehouse workers in Riverside culminated their direct action with the WalMarch, a 6-day, 50-mile march from Ontario to downtown Los Angeles to bring attention to poor conditions in Walmart’s domestic supply chain. 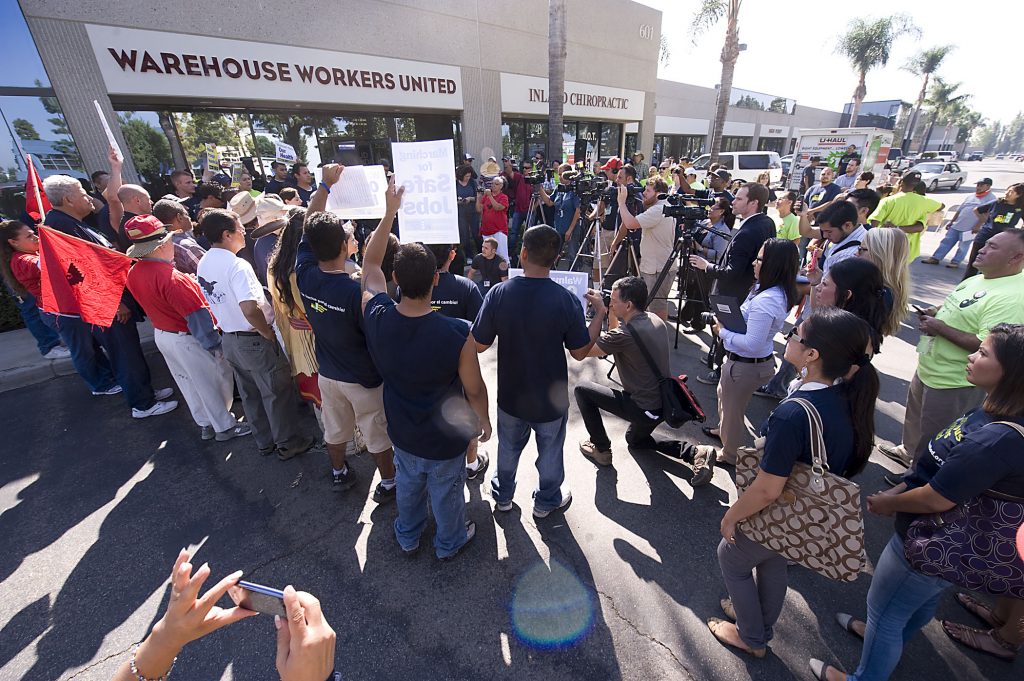 In October 2011 California Labor Commissioner Julie Su’s office investigated the largest Walmart warehouse in the region, run by Schneider Logistics, and cited two staffing agencies for more than $1 million in violations. That same year, workers filed a lawsuit in federal court against three Walmart contractors and subcontractors, alleging millions of dollars in stolen wages over the past 10 years. A federal judge issued several orders and injunctions in favor of the workers, including a temporary restraining order against a mass firing of workers who had filed the lawsuit.

“This settlement vindicates us,” David Acosta, one of the plaintiffs, told the Huffington Post. “When we raised these issues, we knew it would be a fight. Schneider tried to fire us. Walmart tried to deny responsibility. But we knew that the law was on our side.”

Warehouse workers at California Cartage/NFI, the largest warehousing and drayage company at the Ports of LA and Long Beach, endured a long history of wage theft, health and safety and other violations. In 2014 they launched their campaign for justice in the Amazon supply chain with a class action lawsuit filed against the company for not paying the living wage on City property. Ultimately they scored several victories including in 2018 the U.S. Department of Labor said Cal Cartage will pay $3.5 million to nearly 1,500 warehouse workers.

WWRC is a leading organization in confronting the trend of subcontracting and use of staffing agencies in the logistics sector. WWRC has successfully won state policies that hold retailers and warehouse operators accountable for the conditions endured by temporary workers in their facilities. In 2016, WWRC worked with State Senator Connie Leyva to author and pass the first indoor heat standard in the nation, protecting over ten million workers in our state. We were part of the effort to raise the minimum wages across Southern California and to enforce wage theft protections.

In 2021, we worked with Assemblymember Lorena Gonzalez to pass the Warehouse Worker Protection Act, or Assembly Bill 701. The first-of-its-kind legislation went into effect in January 2022 and represents a meaningful step toward a warehouse sector in California that is just and equitable. Employers like Amazon, now California’s largest private employer, have been driving conditions down with high and burdensome quotas for workers, leading to unacceptable injury rates and employee turnover that destabilize regions with large warehouse workforces like the Inland Empire and the Central Valley.  AB 701 bans work performance rates that force workers into unsafe or uncompensated work; empowers workers to take concerns over work rates to state enforcement agencies; and provides workers who speak up or ask about their work rates with retaliation protections. Sensible measures like AB 701 will make the warehouse sector more sustainable and protect the hundreds of thousands of Californians who work in warehouses.

The leadership of David Acosta and many others paved the way for a new generation of warehouse workers many of whom work for Amazon. In the last ten years Amazon has doubled its footprint in the inland Empire. More than 200,000 people in the region work in warehouses, 77,000 of them for Amazon alone. Workers, with support from the WWRC, organize to improve the quality of jobs, end wage theft, ensure they are safe at work and speak out for the community members who live in the nation’s largest warehousing hub.