California Cartage/NFI, the largest warehousing and drayage company at the Ports of LA and Long Beach, will pay $3.5 million to over 1500 workers for wage theft at their customs inspection facility in Carson, CA.

“No contractor receiving federal funds to provide services to the government should gain an economic advantage by paying workers below the wages and fringe benefits required by applicable law,” Kimchi Bui, the department’s district director for the wage and hour division, said in a statement shared in the Los Angeles Times.

Cal Cartage/NFI has a long history of wage theft, health and safety and other violations. The workers are standing up at their facility at the Port of Los Angeles and demanding full-time, good-paying permanent jobs.

In 2014 the workers at California Cartage NFI in Los Angeles launched their campaign for justice in the Amazon supply chain with a class action lawsuit filed against the company for not paying the living wage on City property. Last week, the workers entered into a tentative settlement with the warehouse and staffing agency employers for $1.875 million. A separate suit filed over wage issues is also settling for $800,000. This is just the latest victory for these courageous workers!

The busiest container port in the Western Hemisphere is ever so slightly less busy.

Staff at a major Los Angeles warehouse serving Amazon and other big retailers went on strike Tuesday, protesting unpaid wages and overtime, dangerous conditions, a lack of breaks and water during hot summer months, and retaliation by management against their organizing efforts. The strike continued on Wednesday.

The stoppage is the latest tactic in a campaign to improve conditions at the distribution center at the Port of Los Angeles, according to Sheheryar Kaoosji, director of the Warehouse Worker Resource Center. Workers and advocates have previously filed an Unfair Labor Practice complaint, a class-action lawsuit, and an Occupational Safety and Health complaint, the last of which triggered an ongoing investigation. The other cases are pending.

An Amazon spokesperson said the company had no statement on the matter.

It’s an example of the “fissured workplace” the Department of Labor has focused on in recent months, issuing a new guidance on misclassifying contracted workers. Some labor experts say a recent National Labor Relations Board decision expanding the definition of “joint employer” could allow large corporations, such as McDonald’s or Amazon, to be held liable for labor law violations committed by contractors down the line, such as franchisees or warehouse operators. But such claims have yet to be tested.

Critics of efforts to reclassify such workers say the move could drastically upend business relationships to the detriment of companies heavily reliant on contract work, both large and small. While corporate giants like McDonald’s or Amazon would be hit by any such move, so would smaller business, including fast-growing tech companies in the so-called gig economy.

“The law is certainly becoming more friendly to claims of joint employer status, even in cases where there is no direct or immediate supervision by the putative joint employer,” wrote Benjamin Sachs, professor of labor and industry at Harvard Law School, in an email to BuzzFeed News. “The NLRB’s decision in Browning-Ferris Industries is the leading case in this evolution.”

In the Browning-Ferris decision, the NLRB found that two or more entities are joint employers of a single workforce if they share or co-determine matters “governing the essential terms and conditions of employment,” from hiring and firing to wages and hours.

The Democrat-controlled NLRB wrote in the ruling that “it is not the goal of joint-employer law to guarantee the freedom of employers to insulate themselves from their legal responsibility to workers, while maintaining control of the workplace.”

Such claims have been at the heart of campaigns to pressure big employers to improve wages and conditions for their frontline staff. Worker advocates hailed the ruling as a victory for millions at the bottom of the labor pyramid.

“This shared responsibility under the joint-employer standard should result in better oversight and compliance with important labor laws across industries,” wrote Christine Owens, the executive director of the National Employment Law Project, in response to the decision.

Business groups have contested the ruling, pledging to aggressively lobby against it and saying it will wreak havoc on industries based on profitable franchise and contract models.

In Tuesday’s warehouse strike in L.A., distribution company California Cartage operates the warehouse, a set of three 1940s-era buildings where workers move products such as clothes, furniture, refrigerators, and electronics for retail giants. Amazon is the warehouse’s largest customer and accounts for more than a third of its business, according to Kaoosji. The center also serves Kmart, Sears, and Lowes.

“The city of Los Angeles and Cal Cartage customers like Amazon … need to know that the conditions at this warehouse are dangerous, that workers are not treated with respect, and that we are standing up for our rights,” said Jose Rodriguez, who has worked at warehouses operated by the company for over 22 years. “This warehouse moves products for some of the largest companies in the world, but pays us barely more than minimum wage.”

Marlon Brando as a dockworker in On the Waterfront.

In September, workers and advocates filed federal charges alleging retaliation against workers at the warehouse. The parties state that supervisors tried to provoke a physical fight after employees asked to take a break during the excessive summer heat.

In December 2014, workers filed a class-action lawsuit against both California Cartage and SSI Staffing, alleging they owe millions in unpaid wages and overtime, dating back to 1999. The suit claims the companies have paid less than the mandated City of Los Angeles living wage for decades. The city’s Living Wage Ordinance requires public contractors and many companies that lease public land to pay workers with wages about $2–3 above the state minimum.

Kaoosji also describes workers facing a form of “on-call” scheduling. The suit claims that warehouse staff, like old-time dockworkers on the waterfront, are required to report to the site every day, but can be sent home without pay if they aren’t needed.

And in June, workers filed a complaint with the California Division of Occupational Safety and Health Association (Cal/OSHA), detailing dangerous work conditions, including unsafe equipment, lack of protective gear, and lack of training.

Many of the workers at the warehouse are immigrants, some of whom are not fluent in English. Advocates at the Warehouse Worker Resource Center have helped them prepare the legal documents they’ve filed in their attempts to improve working conditions.

As the Browning-Ferris ruling on “joint employer” has not been legally invoked in a case exactly comparable to this one, Amazon and the other retailers who contract with California Cartage have yet to be found legally responsible for conditions at this warehouse or similar ones.

But precedent now exists, and for many low-paid workers, the possibility of holding a major corporation accountable for their conditions may be their best bet yet at raising standards. Left-leaning labor law experts are optimistic this is the case.

“This ruling [in Browning-Ferris] simply means that corporations that share control over operations cannot feign ignorance or disclaim responsibility for illegal acts,” wrote NELP’s Owens. “Especially when those acts flow from the business model the lead company imposes.”

Until then, there is old-fashioned work-stoppage. Rafael Quinteros, who has worked at the warehouse for 20 years and walked off the job at 8 a.m. Tuesday morning, said the workers have no plans to end the strike: “We will stay out here as long as is necessary.”

Cora Lewis is a business reporter for BuzzFeed News and is based in New York. Lewis reports on labor.
Contact Cora Lewis at cora.lewis@buzzfeed.com.

My name is Gregario Ceron.

I have a family and I have been working at California Cartage, a warehouse in Los Angeles, for 7 years as a forklift driver. We move goods such as televisions, tools, clothes, toys and beer for Amazon, Lowes, Wal-Mart, Miller, Sears and Kmart.

After so many years at the warehouse, I earn nearly minimum wage and still work through a temp agency. It’s a workplace where we do not know if we are going to work every day, where we do not receive benefits or sick days. Every month there is a struggle to see if I can pay the rent or have enough food for my family. 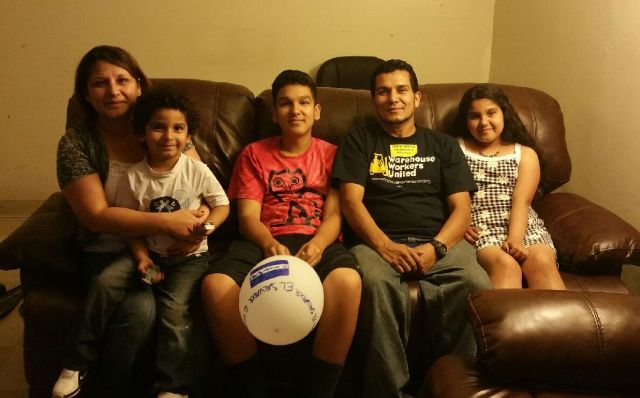 Every day I feel the lack of respect when I cannot even call in sick because management will discipline me by not letting me go into work for a few days. We work in the sun and rain without any shade. It doesn’t matter how hard we work; management humiliates, pressures and threatens us that if we do not work more quickly, they will bring others to replace us.

That is why my co-workers and I have united to fight for a better future for our families by doing delegations, petitions, and filing a class action lawsuit in Los Angeles Superior Court in December 2014 in regards to millions of dollars in stolen wages from our paychecks over the last three years.

But we need your help. Please sign our petition to show that you support us and our families in our fight for better conditions at the Port!