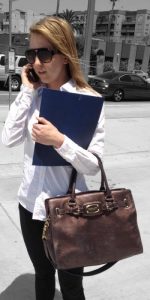 Who is this woman? Last week she claimed to be “Zoe Mitchell,” a young student at USC interested in terrible and illegal conditions inside warehouses that move goods for Walmart.

Last week she told warehouse workers she was a “reporter” interested in their plight, but this week she revealed herself as a PR hack shilling for Walmart.

Send Walmart’s chief hack, Steve Restivo, an email and ask him why they sent a fake reporter instead of addressing the serious concerns of Southern Californians: steve.restivo@wal-mart.com

So who is this Zoe…er, Stephanie? Steph (Can we call you that?) works for Mercury, a giant PR firm that represents a lot of corporate interests. Mercury says it is about “high stakes public strategy” and is especially adept at “Latino Communications.”

So come on Steph, lying about who you are, misrepresenting yourself to workers, community members and local leaders, is that going to get you the corner office?

But, the big question is why lie? For months warehouse workers have been asking to meet with Walmart. There have been many opportunities to sit down with workers: Last year the state issued more than $1 million in fines for labor violations at warehouses where workers move goods for Walmart, UCLA conducted a study about the risky working conditions inside the warehouse, Cal/OSHA issued more than 60 violations totaling more than $250,000 in Walmart-contracted warehouses and workers at a Walmart-contracted warehouse filed a class action lawsuit that documents awful working conditions including working 362 days a years with no break and no overtime.

Last week when Walmart had the chance to talk about real issues affecting Latino workers in Southern California it instead sent “Zoe,” a fake reporter. A spy.

Our door is open. Walmart can change this industry and create thousands of good jobs and improve the quality of life in Southern California, but first it has to come out of hiding.

Oh and you can reach Steph on Twitter: @stephharnett

UPDATE 2: Walmart’s Steve Restivo issues a statement to Gawker: “Our culture of integrity is a constant at Walmart.” But it looks like Stephanie may not have been the first spy. More coverage at The Guardian, Republic Report, LAist, DailyKos, Huffington Post, LA Times, City Watch, Curbed, Business Insider, Democratic Underground, CBS, and LA Weekly

LOS ANGELES – Warehouse workers who move Walmart goods have filed charges against Walmart and its PR firm for illegally spying on workers and are calling on the retail giant to drop Mercury Public Affairs as a contracted lobbying firm.

Workers filed charges after learning last week that a senior associate for Mercury was caught lying about her identity and spying on low-wage warehouse workers.

“We are fighting for better jobs for warehouse workers in Southern California,” said Santos Castaneda, a warehouse worker who was interviewed by a Mercury Public Affairs senior associate posing as a student journalist. “Warehouse workers risk retaliation every time we speak to the media and to learn that the company was hiding behind a fake reporter makes me really mad.”

Walmart has paid tens of thousands of dollars to Mercury to lobby for an unpopular new store in LA’s Chinatown After the scandal was revealed last week, Walmart spokesperson Steve Restivo said in a statement:

“These actions were unacceptable, misleading and wrong. Our culture of integrity is a constant at Walmart and by not properly identifying herself, this individual’s behavior was contrary to our values and the way we do business. We insist that all our vendors conduct themselves in a way that is transparent and honest and we will reinforce that expectation to help ensure this type of activity is not repeated.”

“If Walmart truly is concerned about integrity it will fire Mercury Public Affairs after learning its senior associate lied about her identity,” said Guadalupe Palma, a campaign director for Warehouse Workers United, an organization committed to improving warehousing jobs in Southern California. “We are asking that Walmart to drop this firm and deal honestly with workers and the people of Los Angeles.”

“We want Walmart to disclose why it sent a fake reporter, why she was taking notes and what she did with the information. More importantly we want to know how Walmart is dealing with its renegade contractors. No one has been held accountable in the Mexico bribery scandal, for the treatment of warehouse workers, and now with its PR firm.”

Just in the last few months several major developments call into question Walmart’s claim that it fosters a “culture of integrity”:

The charges were filed with the regional office of the National Labor Relations Board, which prohibits spying on workers. Workers are also requesting that the U.S. Department of Labor investigate whether Mercury and Walmart have properly disclosed their spending as required by the law.

In a new report, the Strategic Organizing Center analysis finds Amazon was responsible for half of all warehouse injuries in the U.S. in 2021.

What's a quota? Everything you need to know if you're working in a warehouse.

Starting January 2022 a new law in California protects the health and safety of warehouse workers. Check if you are covered.