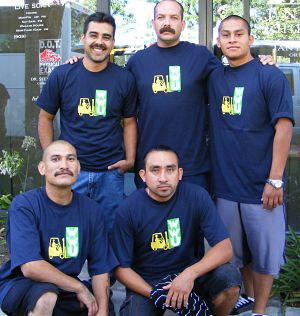 Workers Bravely Call for Safety on the Job

These five warehouse workers routinely work with broken, unsafe equipment, under extreme pressure to work faster and are frequently injured.

June 30 they led a group of 50 workers and supporters to call for a safer workplace and specific resolutions to serious problems they face on the job.

This is no small thing. In the warehouse where they work moving Walmart goods hundreds of workers must lift up to 400 boxes an hour in extreme heat using broken equipment. There is little access to water, they are frequently denied breaks, supervisors yell and the rate of injury is high.

“I’m not just doing this for me and my family,” said Jose Gonzalez. “I am doing this for everyone who works at the warehouse. What we deal with is not fair, it’s not humane. I am not afraid. We have to say something.”

This weekend I plan to join thousands of people in Chinatown in Los Angeles. We are concerned about working conditions that affect people like me who make sure Walmart’s shelves are stocked.

It means a lot for me to be there Saturday. I want people to know about the hard work warehouse workers do and the intense pressure we face moving Walmart goods.

I am going to speak on stage so that people learn about what it means to work in a warehouse.

I worked in the warehouse for about five years moving Walmart products out of containers that come from Asia. I even worked through my pregnancy with my son Chris. The work is really hard and to do it while pregnant made it even harder. I thought the agency that we work for would respect the fact that I was pregnant and I would be allowed to modify my work, but they didn’t care. I had to do the same work as always even though I was pregnant. A lot of times when women become pregnant they are fired so it was very difficult for me — I needed my job to support my family, but I was also thinking about my baby and hoping that nothing would happen to him.

Walmart is particularly hard because of the high quantities and fast pace. I remember one day we had to move thousands of boxes in just a short time. That was the requirement and I had to do it even though I was pregnant.

Because of the tension I had an emergency caesarean. I had to go back to work almost immediately after my son was born, while I was still recovering, but the managers didn’t care. They laughed at my concerns.

Right now I am injured. We lift heavy boxes, 50-75 pounds or more for eight hours a day. That takes a toll on your body.

This story is hard for me to recount. It makes me sad and it makes me angry, but more than anything I worry that if I don’t tell people they will not know about warehouse workers. We work in huge windowless buildings in San Bernardino and Riverside. Temperatures are high, we are exposed to lots of chemicals and we don’t always get breaks or access to clean water, but with peoples’ attention and support I know we can change our jobs for the better and make sure we work in a safe environment.

Wearing a t-shirt may seem like a small thing…but it means a lot when you work in a warehouse.

Today , these courageous workers showed they are united in the face of retaliation to stop extreme pressure on the job, unsafe working conditions and disrespect in Walmart-contracted warehouses.

LOS ANGELES — Major retailers like Walmart are driving down wages and workplace safety standards on a scale far greater than understood before, a report released today by the National Employment Law Project shows.

The explosion of “domestic outsourcing,” the aggressive practice of contracting warehousing, transportation and goods delivery to a complex hierarchy of contractors and subcontractors, has lowered the quality of jobs in Southern California and disproportionately impacted working Latinos here.

According to “Chain of Greed”: “Walmart sets the parameters for the working conditions in (warehouses)…But when things go wrong, it’s the contractors that are blamed, while Walmart skirts responsibility for its actions and accountability for its influence over those engaged in its massive supply chain.”

Hundreds of millions of tons of goods enter the United States every year through our nation’s busiest ports in Long Beach and Los Angeles. Containers are then trucked through the Los Angeles basin to the Inland Empire, San Bernardino and Riverside counties, where roughly 85,000 warehouse workers, mostly Latino, unpack and reload items onto trucks destined for retail outlets.

“Chain of Greed,” the report released by NELP, details how Walmart’s influence over the entire logistics and manufacturing industries has led to increasing reliance on temporary workers who are often paid minimum wage or less, which keeps labor costs artificially low and masks responsibility for these working conditions.

“In order to continue to win business, subcontractors must model their businesses like Walmart,” said Maria Elena Durazo, secretary-treasurer of the Los Angeles County Federation of Labor. “That means consistently lowering standards, lowering wages and cutting corners even if it means dangerous working conditions. Workers bear the brunt of this unsustainable model.”

Every year retailers like Walmart require more for less from their contractors.

“Walmart figured out how to shift the burden off the retailer and move economic risks lower down the supply chain ultimately to a low-paid, mostly Latino workforce ,” said Guadalupe Palma, a campaign director for Warehouse Workers United, an organization committed to improving the quality of warehouse jobs. “Walmart is responsible for the illegal working conditions and low wages at the warehouses that move its goods. Changing this industry means creating thousands of good jobs and improving the quality of life in Southern California.”

For Angelica Salas, executive director of the Coalition for Humane Immigrant Rights of Los Angeles, the report’s conclusion that domestic outsourcing imposes an especially severe toll on Latino and immigrant workers in Southern California and around the U.S. is striking.

“Latinos and immigrants in this industry are facing extremely low wages and little regard for basic workplace safety standards. We see “domestic outsourcing” in many sectors like agriculture, janitorial and cleaning where people do hard work largely out of sight. Shedding light on poor labor conditions will lead to better, more humane lives for a huge part of our population.”

“We worked long days, often 16 hours with no breaks, no time for lunch and no overtime pay. We knew it was wrong, but it seemed like there was no one to talk to to make it better. Things started to change when we stood together in the face of retaliation.”

The report calls for specific recommendations to create “greater transparency and accountability within these multi-layered hydra-like logistics chains” including better enforcement of existing laws and adding warehousing to current law that protects workers in subcontracted industries like as janitorial and agricultural work. It also reinforces Warehouse Workers United’s calls for Walmart to adopt a meaningful responsible contractor policy that would end abusive conditions in Walmart contracted warehouses.

Warehouse workers David Acosta and Jose Martinez talk about their experiences working at warehouses that move Walmart goods and their visions for justice at Walmart for the next 50 years.