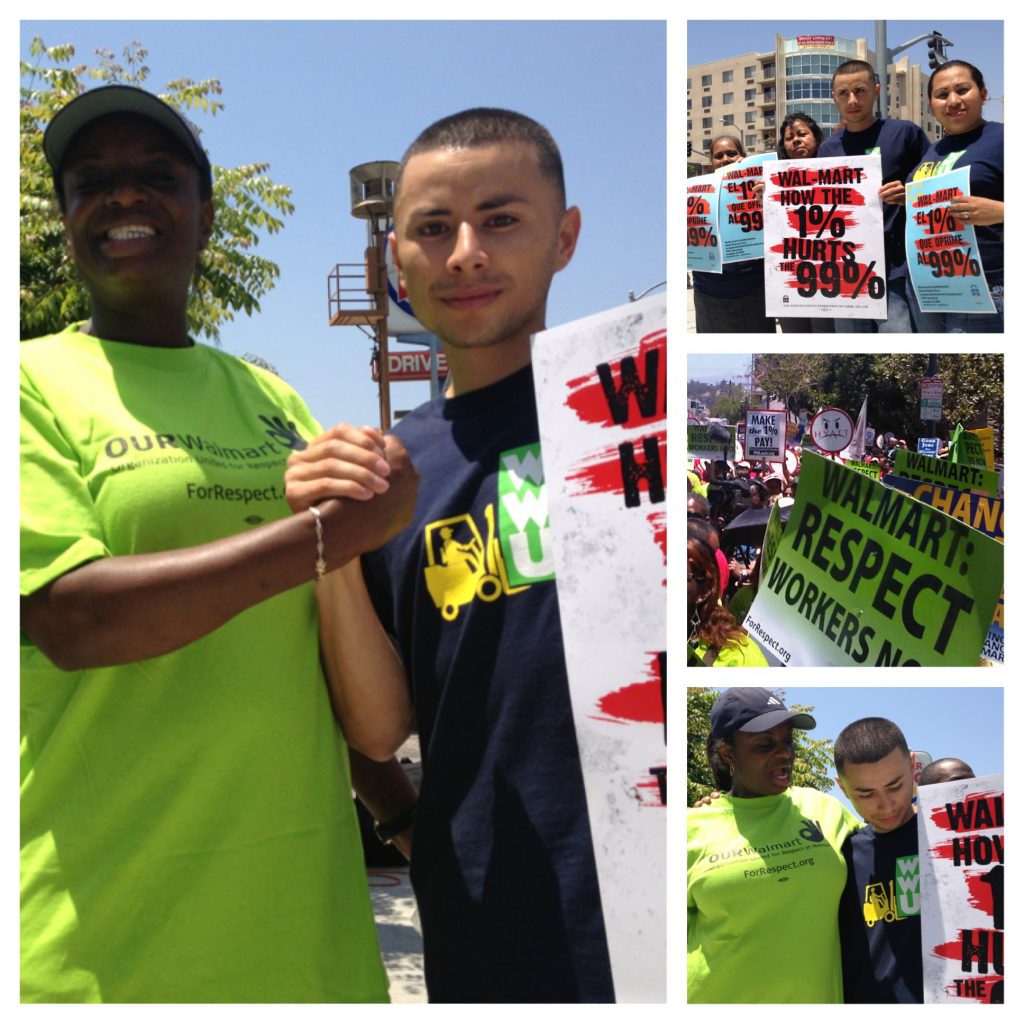 Walmart fired Girshriela Green just days after she spoke to thousands at the June 30 Chinatown protest.  Castaneda was fired from his job moving Walmart goods after he spoke up about working conditions.

Pitzer College Media Studies students produced a video this fall about the struggle that workers at the NFI warehouses in Chino, California have undertaken to improve health and safety conditions at their warehouses. These giant warehouses move goods for Walmart, Kmart and other major corporations. In the video, the workers speak for themselves about the struggle for decent conditions at a warehouse where everybody is employed through a staffing agency. They tell us about why they fight and what this struggle means to them. In this time of the holidays, it is crucial that we think of the workers who are sacrificing by working in dangerous conditions to take care of their families, and supply goods to all of us.

Over 3,300 of you signed the petition to tell Walmart subcontractor NFI to rehire Santos after he was fired for speaking out about the dangerous conditions in his workplace. Thank you for your support! Although workers have been intimidated, they continue in their struggle to make Inland Empire warehouses safe places to work. This illustrates the power we can have when we are organized, we can do it together!

Workers around the nation will benefit from a recent National Labor Relations Board ruling requiring companies to post workers’ rights, but workers at NFI Industries in the Inland Empire of Southern California, a major logistics subcontractor for Walmart and other retailers, face retaliation for practicing their right to organize around health and safety violations.

Chino, CA. – On Aug. 24, NFI Industries fired the complainant of a Cal/OSHA filing that outlined severe workplace abuses and is targeting other warehouse workers with veiled threats of calls to immigration, job loss, assignment changes and employers telling workers to ostracize leaders.

“I was fired moments after speaking out at a rally urging NFI Industries to correct workplace abuses,” said Santos Castaneda, a 24-year old Salvadoran man who has worked for the firm for three years. “I was fired because I left flyers promoting a safe workplace in the break room.” Castaneda is available for interviews in English and Spanish.

Reports of retaliation at NFI Industries comes as the National Labor Relations Board issued a ruling requiring employers to notify workers of their labor rights and their right to act together to improve working conditions and join a union.

NFI Industries was found to be one of the worst offenders of health and safety violations during a federally-funded survey that interviewed 100 Inland Empire warehouse workers. The survey was conducted in conjunction with UCLA and Warehouse Workers United.

Castaneda is among three workers who filed complaints with Cal/OSHA on July 26, 2011 and is the first to be fired. The Cal/OSHA complaints outlined the following abuses:

“I’m speaking out because I want the conditions to improve for workers who come after me,” said Marta Medina, an NFI warehouse worker for 5 years and another complainant on the Cal/OSHA filing. “I’m scared I will lose my job, but I can’t stay silent.”

NFI Industries moves merchandise for national retailers including Wal-Mart, Sears, Home Depot and Kohl’s and employs warehouse workers through the staffing agency, Tristate, which is housed on the premises of NFI Industries in Chino, CA.